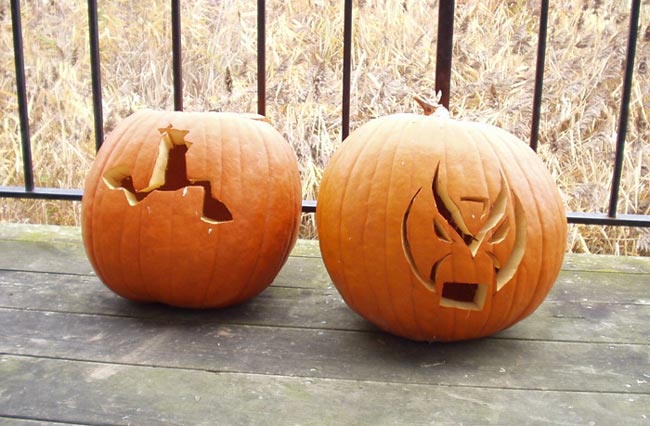 I only take one picture of each of my girlfriends. Why do I need more than that? The trend began as a conservation of film. I was poor but liked to take pictures. I had to take pictures of only really important things or events. I could keep taking photos on the same roll of film for months.


I use the pictures to remind myself of a time and a place and to prove that something really did happen.


1- My trip to the New Orleans Zoo, me standing next to the lemurs [taken by Kate]
-Kate and I made out that night in a hotel pool while two people with videocameras recorded the act.


2- Kate in New Orleans by a statue in Jackson Square
-After the picture, she gave a dollar to a girl with dreadlocks in a cheerleader outfit doing cheers for money, for heroin.


3- Snow on the ground in Mississippi on New Year’s eve.
-I made a snowball that I put in the freezer.


4- Samantha on a couch in our friend Jim’s apartment
-We three drank vodka shots that night from a bottle Sam brought back with her from her semester abroad in Russia; we talked about bread making in the U.S. and sexual ethics in Russia.


5- Jim and I looking really cold during a deep sea fishing excursion in the Gulf of Mexico
-Only the captain caught any fish.


6- My little sister on her 16th birthday with all of her friends.
-She didn't get a car and wanted to borrow mine. I didn't want to stay at home with her mom and my dad with no transportation, either. We understood each other for once.


7- Noam Chomsky and me after a speech at the University [taken by Julia]
-He smells like cK one, really.


8- Julia with Noam Chomsky
-We stayed for the after-lecture question and answer session. There was good popcorn. She asked a question about disillusionment and he answered with something about East Timor.


9- A picture that was supposed to be of a meteor shower, but just looks black
-Maybe there really wasn't a meteor shower that night. Our lives (Julia’s and mine) were stagnant and we had to get outside, to try to believe in something. Nothing ever really happens, we found out, probably not even meteor showers.


11- The dark green standing water in the pool in my apartment complex.
-Kevin jumped in the water the next night after having taken many pills. He said the water was just fine and dandy.


12- Mary standing in front of the old train depot in town.
-We broke up that night after having had only mechanical not passionate sex.


I dropped my camera during a trip to Orlando when I was 12. The film door popped open and the roll was exposed. I got really pissed off.


I tore the roll out and put in a new one. The camera was a cheap one, but one that was supposed to advance the film mechanically and automatically nonetheless. I didn’t hear any whirring when I put in the new film. I had broken my camera.


“That’s what you get for not being careful,” said my dad. I was being super careful with that damn camera! I loved that cheap almost-toy.


I put it away in my dad’s then-in-style fanny pack. (Weren’t they in style?)


When we got back home a few days later, I put the camera in a drawer for safe keeping, thinking that one day I would be industrious enough to get around to taking it apart and fixing it. Or at least I could figure out how it worked.


I forgot about it for 5 years.


I hooked up with Xavier once on a trip through Texas. I had my picture taken with him, but the roll of film got lost. All you have is my word. He wouldn’t back me up. He probably doesn’t even remember me. Hell, that was a few years ago. So many people come and go, you know.


He was running for some kind of political office. Constable I think. I don’t know what a constable does. I think it has something to do with running around the off roads of a county and delivering warrants and stuff. But there I was, driving on some county road in mid-Texas, waiting for a desert to show up past the rolling hills and Joshua trees.


We had been out there for about an hour, me and my three friends, just cruising along in my little blue car. We thought we were going somewhere, should have already been there, and knew we must be lost. I pulled over on the side of the road and got out of the car. There was quite a breeze blowing- a wind, actually. Lots of sand in the wind, but no desert in sight, still. I asked for the map, unfolded it, and placed it on the hood of the car. It wanted to blow away.


Where we were wasn’t even on the map. But that is really because we didn’t know where we were. Fuck it. Let’s get out the camera and take pictures since we’ve stopped.


Snap. And there he was. In the background. Photographer Kris said, “Hey, turn around, check it out!” I did—


Xavier Montalvo. That beautiful name. He probably doesn’t remember me because he was a sign. Maybe he doesn’t even exist as a person. I didn’t say I met him. I hooked up with him. Or the camera hooked us up. Me and his name. On a billboard.


A roommate once told me that he felt like such a hypocrite for taking pictures. He was a vegan and didn’t eat meat or use any other animal products. Camera film uses animal bones all crushed up as its base... Damn. So does Jell-o.


I can take a Polaroid of my shoe, my naked girlfriend, or my dog all without the embarrassment of taking the film out to be processed.


The only pictures that I am comfortable taking to the film counter to be developed at the local supermarketextravaganza are the ones that I take with my non-Polaroid, non-disposable camera. And those pictures are of posed events like weddings, birthdays, and Thanksgiving with the family.


Nonetheless, an extroverted exhibitionist may prefer to do their dirty deeds under the watchful eye of the minimum wage 1 hour photo developer.

(This story originally appeared on Surgery of Modern Warfare)